Five-star satisfaction and the best value for money available

THE NATURAL CHOICE FOR GREEN BURIALS

This form of burial is for those wishing to organise a funeral which minimises any impact on the environment and is the obvious choice for those who care about the world around us. It is also sometimes referred to as a green, eco or woodland burial.

Rather than taking place in a traditional cemetery, there are special natural burial grounds which have specific requirements to safeguard the natural environment. Our package is based on the Dale Hill Natural Burial Ground just to the east of Derby but most other burial grounds can be accommodated within the package. The setting is usually a nature reserve (or similar) where a tree may be planted to mark the grave, as large conventional headstones are often not permitted. The body cannot be embalmed due to the chemicals involved (but this process is very rarely necessary anyway) and the coffin must be entirely biodegradable.

If protecting the planet is important to you and your loved one, then this option is by far the most environmentally responsible funeral currently available.

Please note that this fixed price can be reduced if a plot has already been purchased.

Most of our reviews can be found on the Funeral Directors Register which is currently unavailable due to upgrading and necessary maintenance but you will find and many more have been uploaded on to Facebook and Google.

Without using a specialist funeral director it is extremely difficult to organise a genuinely environmentally-conscious funeral.

In almost all cases, the conventional funeral director offers their excessively large diesel-powered or V8 petrol engined hearse which produces particularly high emissions. Also, these vehicles have gone through the manufacturing process twice as they are initially made as a conventional car and then immediately remanufactured, enlarged and repainted in order to create a hearse. None of this process is environmentally friendly – and crucially, all of it is unnecessary.

By contrast, as a specialist in natural burial, we use a modern plug-in hybrid standard estate car shaped vehicle which runs entirely on electric power for most of the time and has ultra low emissions. 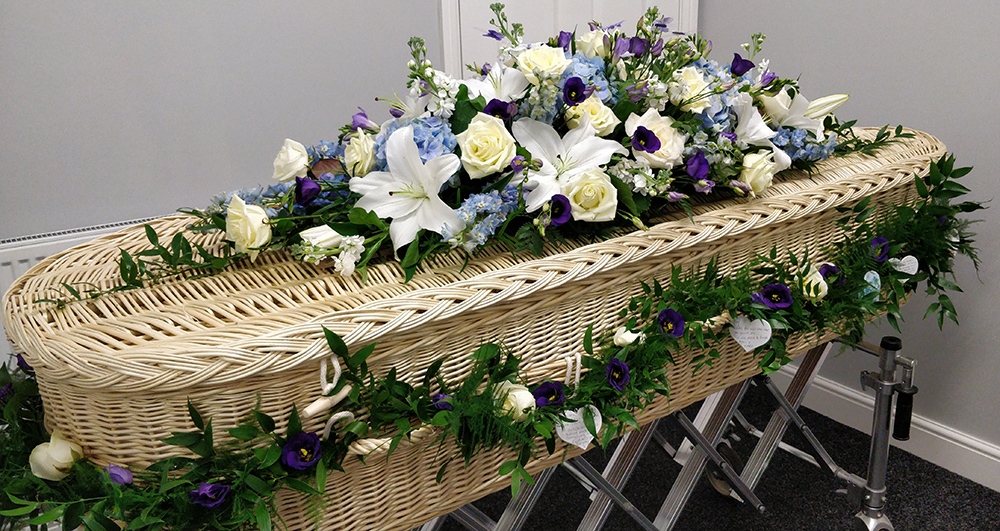 Another major problem concerns the coffin which is usually constructed from chipboard with only a veneer of real wood, or alternatively a cheap wicker coffin imported from the other side of the world may be offered. Neither of these options is appropriate for an Eco funeral.

We, however, chose our coffin options not based on keeping our costs down but instead focusing on environmental considerations.  Our standard package specifies a top quality English Willow wicker coffin grown and constructed to individual order in Somerset. We even organise for the family to attend and take part in the making of the coffin if you wish to do so. Alternatively, we will provide a cardboard coffin, a solid pine coffin with wooden handles or a natural wicker coffin made from Bamboo, Banana or Water Hyacinth for example if preferred and at no extra cost.

Our fixed price Premium Natural Burial Package costs just £2,950 and includes all of our fees as well as all the necessary third party charges, such as the burial plot itself and preparation of the grave. Most of the natural burial grounds in England are included in our standard package however our price will, of course, be reduced if your loved one had already purchased a plot in advance.

All of the following is included in this complete funeral package:

As pioneering modern funeral directors, we specialise in conducting contemporary style Celebration Of Life funerals and direct cremations throughout Derbyshire and Nottinghamshire as well as further afield upon request. The traditional black hearse is regarded as the symbol of death by many people, but also these large and heavy vehicles are particularly inefficient and waste valuable natural resources.

Typically in the UK, a hearse would be powered by a large V8 petrol engine or a 6-cylinder diesel, neither of which is at all fuel efficient or environmentally friendly in any way. With concern about one’s carbon footprint becoming increasingly widespread and important, we felt it was essential to be able to offer a greener alternative to effectively become our plug-in hybrid hearse.

Most hybrid cars are simply too small to accommodate a large coffin especially with a floral tribute on top, but there are a few suitably large vehicles which are also prestigious enough for this important role. The Volvo you see pictured stood out to us as the vehicle of choice due to its impressive green credentials as well as being sufficiently large. There are also probably more Volvo funeral vehicles in this country than any other brand.

The Trust Funerals plug-in hybrid hearse is a Volvo XC90, the T8 Inscription Pro model, which is the most expensive car Volvo produces. Although this vehicle would be described as a large SUV, in this particular model there is a small petrol engine that powers only the front wheels. This is aided by the electric motor which helps keep the emissions extremely low for this type of vehicle and generally provides a fuel economy of 50 – 100 miles per gallon. Journeys of less than 25 miles can be made with zero emissions from the car and on longer journeys, when the battery has been depleted, the petrol engine can also recharge the battery pack for instant reuse whilst driving.

Inside our XC90, the car is very luxuriously appointed. The almost-white leather interior combined with a large panoramic glass roof makes the car light and bright, enabling a better view of the coffin and any floral tribute which it proudly carries.

With the introduction of a plug-in hybrid hearse alternative vehicle, we will be able to also offer environmentally aware cremation funerals as well as natural burials too.

If you may be in the position of organising a funeral where environmental issues are an important consideration please don’t hesitate to give us a call to discuss your requirements.

We provide our advice free of charge with no assumption or expectation of being subsequently chosen to arrange the funeral. We also take pride in our aim to give an exact quotation at the first point of contact If our package does not entirely meet your requirements. This is very often not the case when families make their initial enquiries, however, we feel that it is important to provide a precise figure before we have been chosen. It means the common problem of exceeding the budget for the funeral is easily avoided.

For a truly and genuinely green funeral or natural burial there is only one choice: please speak to us at Trust Funerals.